By Raffi Marhaba with editing by Ana Hurwitz
TW: Homophobia

I came out when I was 13. The world before then was already vampiresque, hollow and dark to me. After coming out of the closet, it became even more apparent how angry I really was when I started to understand that the experiences I had (and was about to have) were systemic, so much bigger than me.

My first contact with activism as a teenager was through the LGBTQ+ community. However back then I worked solo and not only mocked but despised and regarded most LGBTQ+ activists as conformists and tame. The thought of anyone wanting to build bridges or work with heterosexuals was beyond my understanding.

“My voice and my anger were the only weapons I had against homophobia (and other buried traumas) and I intended to use them as loudly as I possibly could. I was a lone warrior in a world that hated women and LGBTQ+ folks.”

My “no-sugar-coating” attitude and blunt anti-heterosexism soon began to be noticed in the small LGBTQ+ community of Sao Paulo through Orkut, a predecessor of Facebook (does anyone remember it?) and Fotolog.net. If I were to transport my Orkut account to Facebook this is what it would have looked like: 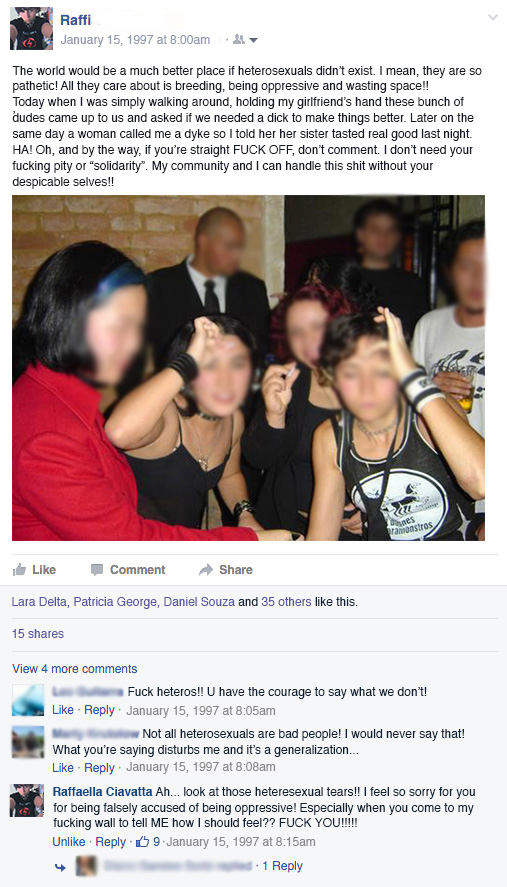 I bet many of you now are “appalled” by my behavior and perhaps many of you would have defriended me then, called me names or felt sorry for me. But listen up. I want to challenge the dynamics of this relationship.

My voice and my anger were the only weapons I had against homophobia (and other buried traumas) and I intended to use them as loudly as I possibly could. I was a lone warrior in a world that hated women and LGBTQ+ folks.

The systems that were (still are) carefully designed and in place didn’t allow me to exist without being called a dyke (back in my pre-transition days), offered a dick by cis men (as if lesbians never date trans women who have dicks), being mocked at, laughed at, sexualized, physically assaulted, bombarded with images of straight happy couples, living a perfect life.

For the longest of time I never fully trusted straight folks. I always thought there was an underlying reason why they wanted to be friends with me – either because they needed to feel better about themselves with their “Look, I’m not like them!” argument or because they wanted something from me, like men getting aroused from my stories or similar things.

The truth is that no matter how loud I was, the chances of the world ever being LGBTQ-only was nearly impossible. So I ask that we pause and analyze the power dynamics that we have here: no matter what I said, by the end of the day the chances of me being verbally or physically assaulted were still very high. No straight person will ever have to worry about being beaten up over their sexual orientation. End of story.

It is my right, as someone who has been systematically oppressed, to let my rage breathe. No matter if the things I say are violent or offensive, it is not for straight folks to tell me how to deal with my anger.

Is exterminating all heterosexuals going to make the world a better place for LGBTQ+ people? No. I do not believe so and never believed it. The truth is that back then straight folks terrorized me, I said and did things that may not seem the most logical or effective.

But were my feelings justifiable? Yes. They were a perfectly natural response to oppression and it was the best I could have done at the time where I literally had no more energy left to keep fighting.

Could I have dealt with things differently? No. Not at the time. My spirit had been so broken that anger was the only way I found to vent. I don’t believe in misanthropy neither do I believe that attitudes similar to mine for an extensive period of time are perhaps beneficial to anyone or any movement. The toxicity of it actually hurts us. But we have to understand where they come from sometimes and allow space for grieving.

As the complex human beings that we are, and part of deconstructing the binaries, we have to understand that our emotions are not in opposition with one another: anger vs. calmness/inner peace/love and all. That’s some bullshit colonial thinking! The forces of anger can be both water and fire without one putting the other out.

I worked really hard to move my anger from a self-destructive repetitive cycle to one that impacts and changes. Self-care was something I thought was a luxury, instead of a necessity and right. Once I allowed myself to do the things that nourished me, like working out, poetry, talking it out, music, etc., I was able to actually have a conversation with my anger. And not only that, but allowing time for community care became just as equally important to me.

Next time you see someone with similar behavior, don’t be “appalled”. Don’t stop being friends with them, don’t call them names, and certainly don’t pity them. Let their rage breathe. Don’t try to say “It gets better,” especially if you’re not part of their community. Sometimes the best allies are the ones that know when to remain silent. If you make these mistakes, own up and apologize.

Rage is a way of resistance! Anger has been used by many people, movements, and countries! Think of Brazil’s (and Latin America in general) blunt anti-American stance: one of the ways a country built on colonialism has found to defy imperialism is by publicly  “hating” on Americans. Think of Black Rage: a book which focused on the racial crisis in the US. Think of Black Lives Matter: a movement which emerged out of the rage and mourning that accompanied George Zimmerman’s acquittal for the murder of Trayvon Martin. To ask those affected by the system to stop being angry and “negative” is nothing short but white supremacist.

Let’s do our best to support oppressed peoples in our communities the best we can. And when they get angry, let their anger breathe!