Is Collectively Free The New Hybrid Between Direct Action Everywhere and 269 Life?

In our journey as activists, we often find ourselves in difficult situations with the general public, in which we get mocked, shut down, and criticized for the sake of criticism. However, nothing is worse than getting mocked, shut down and receiving non-constructive criticism from our own community. This is why we decided to write this article and answer the infamous question “Is Collectively Free The New Hybrid Between DxE and 269?” The short answer is no. The long answer is also no, but we will elaborate on that for you.

We have been recently “accused” of doing very similar actions to both DxE and 269 Life. Let’s start with DxE and why we are not in fact the same thing. Before Collectively Free was born, both founders envisioned a group that would “crash” events and deliver a powerful message. We were not sure exactly what “crashing” meant but we knew the same methods of just leafleting and being overly nice to people wasn’t working. We then had the privilege of listening to a talk by Wayne Hsiung  in which he explained the importance of “crashing”, a.k.a. direct action, we were so inspired and comforted by the fact that there was another group already doing such great actions that we too wanted to put into practice.

“Is having two groups that do direct action really that bad? Why would it be such a horrible thing? If we were truly concerned about animals and not our egos, we would rejoice in the fact that there are at least two groups doing direct action. So we kindly ask, put your ego away and embrace the diversity that ALL groups in the Animal Rights community bring.

Does that mean we are a copy of DxE? No. If you open a bar and two weeks later someone else opens a bar across the street from you, would you say they’re copying you? Activism comes in many shapes and forms, but in the AR world of activism we have not seen much growth or change in tactics in recent years, which is the precise reason for the lack of overall success of the AR movement as a whole. The fact that there are multiple new organizations that focus on direct action means that there is a NEED for direct action, a NEED for new tactics, and a NEED for a new types of involvement. Much like perhaps there’s a need for two bars on the same street you opened yours.

Going deeper, Collectively Free has very different campaign execution from DxE. We rely heavily on visuals to tell our story more effectively. Take a look at our campaigns and you will see how the visuals play a key role in CF’s mission and messaging. We also use very inclusive messaging in our speeches as to not make people feel alienated but rather that they can be part of the solution – especially because when we do direct action, we go into more upscale venues. Furthermore, CF doesn’t do only direct action. We do screenings, projections, vegan mentoring, educational programs and yes, direct action.

“So, you’re saying you’re not DxE because you’re very visual – well that just sounds like 269 to me!” Again, we will ask you to throw your ego out of the window. We are not 269. Just because we adopted a theatrical base to our campaigns does not mean that we are a “copy” of 269 either. If you start a theater company and decide to produce “Hamlet” only to find out that another theater company in a different country is also producing “Hamlet”, does this mean either of you is copying the other? It’s a silly example, but not more silly than the comparisons between any two activist groups that happen to work towards the same goal. Again, we respect and admire all that 269 does and would never dream to plagiarize from them, or anyone else. 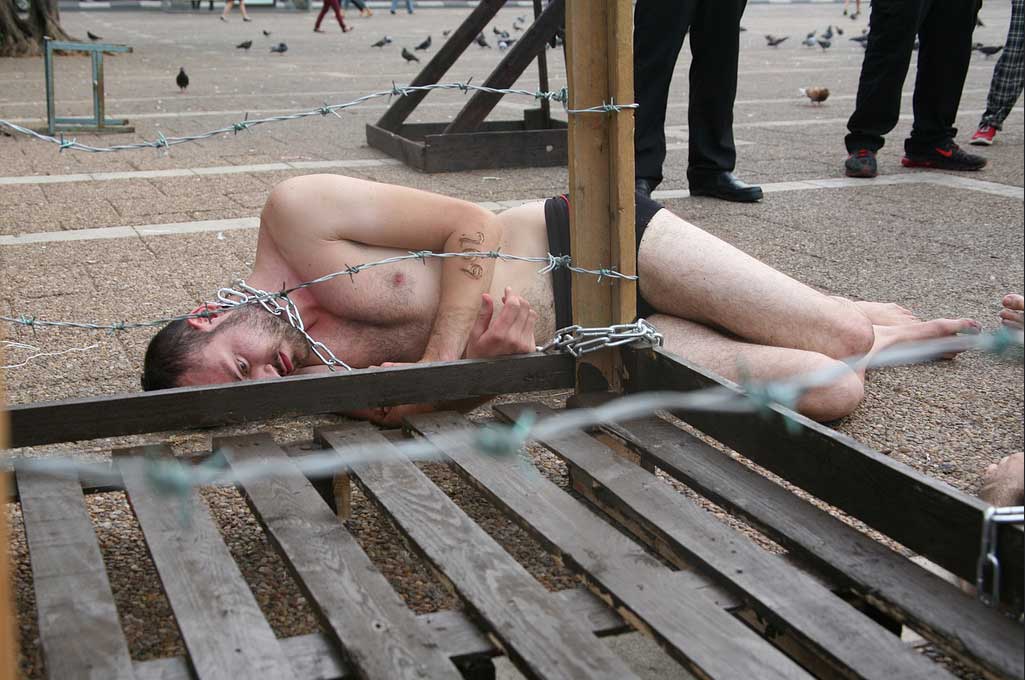 We are a very new organization; we are full of ideas we plan to execute, but we are also learning and evolving with every action we take, which in turn brings us more ideas. What we cherish the most is the support of all our allies in the movement, here in NYC and elsewhere in the U.S. and the rest of the world. Our movement needs this kind of support in order to advance. We must think and act in solidarity despite our differences in methodology. Together, one struggle, until we are all free.