Is the PETA & Whole Foods’ Honeymoon over? A Result of Grassroots Animal Liberation Success?

There are encouraging signs that the large animal welfare groups are breaking the alliance they have forged with so-called humane animal exploitation industry. Could this be attributed to the success of strong, grassroots voices for total animal liberation coming to the forefront of animal rights? We’d like to think so!

People for the Ethical Treatment of Animals (PETA) is suing Whole Foods for false advertising because Whole Foods touts their strong focus on animal welfare while horrifying confinement and mutilitation without painkillers is still standard practice even on “humane” farms. Of course, PETA doesn’t quite go all the way to say that there is no humane way to raise, exploit and slaughter animals for human desires, it is still a significant divergence from PETA’s previous cheerleading for “humane” exploitation.

We don’t mean more effective for their popularity, membership or fundraising, but more effective in actually representing the cause of animal rights rather than continuing to contribute to the myth of humane meat.

This illustrates the success of grassroots groups like Collectively Free (CF) and Direct Action Everywhere (DxE) pushing the large animal welfare organizations to be more effective. We don’t mean more effective for their popularity, membership or fundraising, but more effective in actually representing the cause of animal rights rather than continuing to contribute to the myth of humane meat.

Uncompromising grassroots voices such as CF and DxE can move the center of the debate towards animal liberation vs. welfarism and make the large groups like People for the Ethical Treatment of Animals (PETA), Mercy for Animals (MFA), Compassion over Killing (COK), Humane Society of the United States (HSUS) and Farm Animal Rights Movement (FARM) feel more empowered and indeed pressured to move towards abolitionist campaigns rather than welfarist ones.  What are the chances PETA would call Whole Foods out on humane washing, and launch an anti-welfarist lawsuit, if Collectively Free and DxE weren’t already targeting Whole Foods? In our opinion, pretty unlikely!

In 2005 PETA awarded Whole Foods, “Best Animal-Friendly Retailer” and has since been lauding them for their “5-step animal welfare rating system,” which has been formalized by the Global Animal Partnership (GAP) organization. GAP, almost exclusively funded by Whole Foods has on it’s board former or current executives from PETA, HSUS and COK as well as Whole Foods CEO, John Mackey and other animal agriculture industry representatives. First let’s let the absurdity of an “animal friendly retailer” that murders, confines and exploits animals sink in. Now, lets hope this is a sign of the shifting tides for these large animal welfare organizations. It’s encouraging to see this rather than MFA’s consumerist (and click-bait), “29 thoughts every vegan has at whole foods” video, which may as well have been created by Whole Foods own marketing department. More encouraging is that it shows our grassroots tactics are achieving their goals; that by speaking up loudly and boldly with an unequivocal message it will sweep the rest of the movement up in the rising tide for total animal liberation! 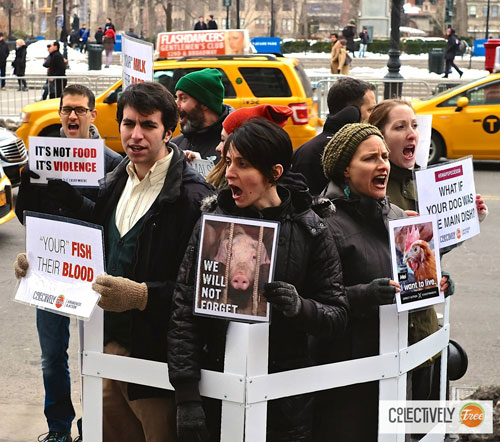 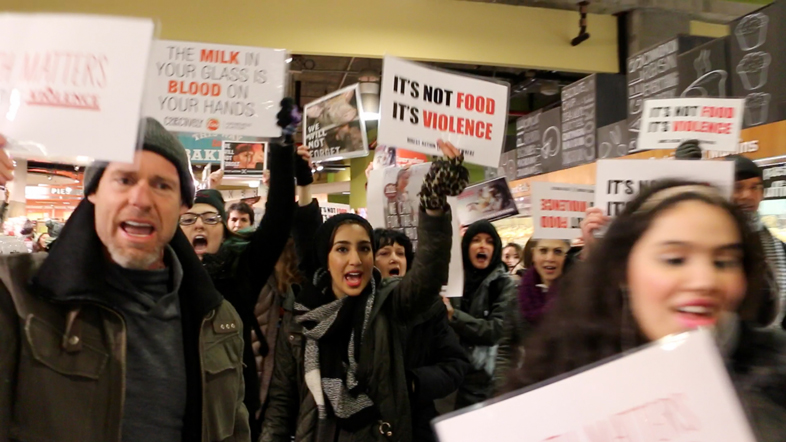 Join us in our efforts to change the culture of speciesism! Like us on Facebook to be up-to-date with our actions.