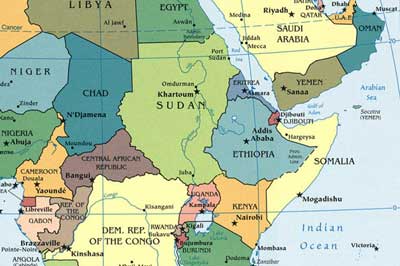 Africa is now enduring its worst droughts in over half a century.

Ethiopia’s drought is even more severe than the 1984 famine which claimed one million lives.

Extreme drought has hit South Africa, unlike the world has seen in decades.

The UN has declared a humanitarian emergency in Somalia.

Zimbabwe has officially rang the alarm bell of a national crisis.

Countless animals have died of thirst. And, exacerbated by El Niño, millions of people in these African countries have been displaced from their homes and face hunger in the wake of the droughts.

Despite what society says, these people are more than statistics but rather full human beings seeking freedom from harm. As citizens of the world we have a collective responsibility to be in solidarity with the most vulnerable, especially in these times.

Veganism is a call for racial justice. Because factory farming is the major cause of climate change. And those most harmed are always communities of color in the Third World.

What can we do from so far away? If Black lives matter, go vegan for Africa. While veganism alone cannot save Africa, non-veganism is absolutely causing its climate crisis.

Ultimately as a global community we need to move towards resource reallocation, eliminating food waste ahead of when disaster strikes, as well as comprehensive wealth redistribution. Food justice groups such as A Well-Fed World and Food Empowerment Project touch on these issues.

Ultimately we need socialism. Veganism is merely an abstention from greater harm. On the environmental front, we cannot effectively advocate for the liberation of Africans while simultaneously contributing to their suffering with our everyday purchasing power.

Factory farming consume one third of all the planet’s water. This affects people in Ethiopia, where 80% of the country depends on agriculture. Despite economic growth, 10 million people are hungry as their crops die. Under capitalism, they’re not guaranteed food as a universal right.
Animal agriculture contributes anywhere from one fifth to one half of all greenhouse gases. This is because cows produce billions of gallons of methane every day.

The scientific community is in agreement that climate change is  caused by greenhouse gases–heat trapped in the atmosphere that is radiating from Earth to space.

Nearly half of all land on the planet is used for animal agriculture. Land that could be used to plant enough crops to end world hunger several times over.

Scientists have concluded that (if we stop breeding animals to be raised for food and) if all crops are fed to humans instead, 70% more food could be added to the world. And with a surplus to feed four billion more people.

Veganism could more than provide us with this abundance of material resources. Yet it’s not as simple as using the land to grow plants instead of raise animals. Food access would be a subsequent matter of distribution.

Four million people in Zimbabwe alone urgently need food aid in the wake of a drought. This has been intensified by global warming. And it’s affecting Zimbabwe’s children.

One hamburger requires 660 gallons of water, yet we experience ‘water shortages’. Water that is desperately needed by the people of Somalia.

Women and girls walk for hours and miles every day to gather water. Somalia is possibly the world’s poorest country. 4.7 million people (40% of the population) need humanitarian aid.

It’s time to start living our ethics and go vegan for social justice. Anti-vegans often bring up classism as a barrier to going vegan, due to advertising misinformation which conflates vegan foods with pricey organic health food. But the truth is that cheap vegan foods – burritos, rice, beans, lentils, potatoes, soups – are available everywhere (oftentimes even in food deserts).

Veganism is more than a diet. Veganism is a moral position of siding with the powerless. So if we are truly concerned for the poor – the very most economically disadvantaged humans in the world – we will at least live vegan. Because non-veganism is killing the poor. Because our support of animal agriculture is killing the planet.

Making the everyday choice to adopt a vegan lifestyle, multiplied by billions and billions of people, has the power to change the world.

Unique Vance is the co-founder of Vegan Voices of Color, an organization whose mission is to spread awareness of the intersections of oppression that connect animal agriculture and People of Color. An environmental justice activist, she has been involved in numerous racial justice and human rights organizations, advocating for marginalized and oppressed beings and the planet.