“It was a cold night…” says the first line of the poem. The truth is that every single day is cold for animals who are imprisoned in farms, caged in labs, used as entertainers, hunted down, exploited, and murdered. There is a genocide taking place at every second of every day to non-human animals and yet it seems to be the most unnoticeable one. We turn our faces away before this horror and use forks and knives as a weapon of mass destruction. What has happened to us? Why have we chosen to ignore their suffering?
There is one industry whose best skill is to mask this violence, their pollution and destruction to our planet: the animal agriculture industry (click here for more info).  Alongside this industry there is also a strong support from the media and marketing  industries to perpetuate their lies. And the worst part of it is that we have bought into it. We currently live in a system which has desensitized us to the beautiful beings non-human animals are. We have normalized and packaged their corpses and called them food, an experiment or a sport.

For the 70 billion land animals executed every year… for the 1 trillion sealife whose lives have been taken away, whose family and friends have been murdered, whose dreams have been shattered… We are here to speak for you… We feel your anguish and fear and despair… We will empower others with your story… So the future ones can be changed… Until you are all free.

Why did we choose Whole Foods for our first intervention? For starters, Whole Foods makes you believe that buying “humane” exploited animals is acceptable and honorable.  It perpetuates the lie that you may pat yourself on the back for choosing to spend your dollars in killing beings who did not consent to die. Let’s us create the following scenarios for you: For the sake of simplicity, we will use a man and a woman as examples. A man walks into a bar. He sees a woman. They exchange some flirting looks. They start to talk, they drink, they dance, they talk some more, the chemistry is great, and she invites him over. They get to her place, and she offers him another drink. He accepts it but roofies her drink. She then loses consciousness, he pulls his pants down, rapes her very gently while kissing her face and whispering, “I love you”. He then puts a bullet through her head. She doesn’t feel a thing. The question we want to leave you with is: would you say this was humane? We hope not. And lastly, Whole Foods is still part of the many establishments which normalizes the consumption of corpses and animal secretions. So we would like to send them and all the other establishments of torture the following statement:

Whole Foods, we have joined our collective efforts to send you a message of kindness and not one against you. There’s an industry that’s killing billions of innocent lives, that’s destroying and polluting our planet, and that’s making us ill – that industry is called animal agriculture. Their products are the result of suffering and death, no matter if you put these labels on them:

When you choose to carry these products you are contributing to the culture of speciesism. Speciesism – like racism, sexism, ableism, etc. – is a form of discrimination, based on the presumption that the human species dominates over another species. As all types of discrimination, speciesism too is unethical and unjust. Unfortunately, it is the hardest form of discrimination to overcome because we have conditioned ourselves socially to not even acknowledge it. The good news is that discrimination is not inherent (nothing in our DNA tells us that one species, or one race, or one gender is superior to the rest) and therefore can be unlearned).
THE PROBLEM

THE SOLUTION
You can do something right now, today: stop supporting animal agriculture! Stop selling animal products! Take a stance and change the course of our History. Be the model which people can look up to. By doing so, you will make your first active step towards abolishing exploitation – ALL exploitation. By rejecting to sell “dairy” and eggs, you are actively rejecting the objectification and violation of the female gender and reproductive system. By refusing to sell flesh, be it that of a mammal, bird, or sea animal, you are refusing to participate in a system that enslaves and tortures other beings for profit. And by speaking out against what’s wrong, you are acting towards achieving what’s right.

We will continue to send our message of kindness and compassion and we will support you when you embrace animal liberation.

Collectively Free’s “It’s Blood On Your Hands” campaign unmasks the norm and challenges it – it strips away the euphemisms and goes to the root of the cause. It reveals the truth behind the steak: the blood. In parallel CF always works to empower people to change through inspiring stories and visuals. Some may question our approach and ask: “Do you really think you made an impact?” And our answer is yes. Especially on the kids who were present in that night. Kids are much more inquisitive and quick at connecting the dots than we give them credit for. Perhaps at the dinner table they will ask their parents if eggs is really blood, or they will ask them why were those people chanting “the meat on our plate is blood on our hands”? What do these words mean? The possibilities are infinite. In addition to exiting the store,  having people film us, and distributing our leaflet, we had the pleasure of having the company of a man who was truly inspired by the intervention and tagged along with us wanting to know how he could join our next action. We hope he does!

There is so much room to improve this campaign and we will strive to make it better every time. One of our brave activists commented: “I could barely sleep last night I had so much adrenaline (with elation) watching the video several times! I’ve always wanted to do something like this, and can’t wait to do it again and again until it’s not ever necessary anymore. I think our scripts/poem were done really nicely last night and we pulled it off amazingly with what little time we had to rehearse together!… I got to watching some other vids from previous demos, however, and there was one with the girl walking in on her own and droning on and on about her baby “Snow”, and although I think she was a great performer, it took a little too long to get too the point. The timing worked right for us last night I think because we had to attract and gather the audience as they were shopping… but when we walk into a restaurant or place where spectators are already seated (popcorn in hand), maybe get to the point in less time?” He is right. We won’t limit ourselves to one establishment! Another great criticism we got was “I think it was because we engaged every customer within sight and earshot, and they listened. Also, there was no heckling and people were receptive to the messaging and leafletting. Our timing was also great, as the poor security guard showed up just as we went into our exit chant/march. I think the only thing we may be able to improve is our chanting at the end. Maybe it can be just one simple chant that contains the “blood on your hands” message or we just need to practice more!”. The beauty of a group of dedicated and passionate individuals is watching it evolve.

The choice is yours. Stop consuming death.

Check out the video for this campaign below. 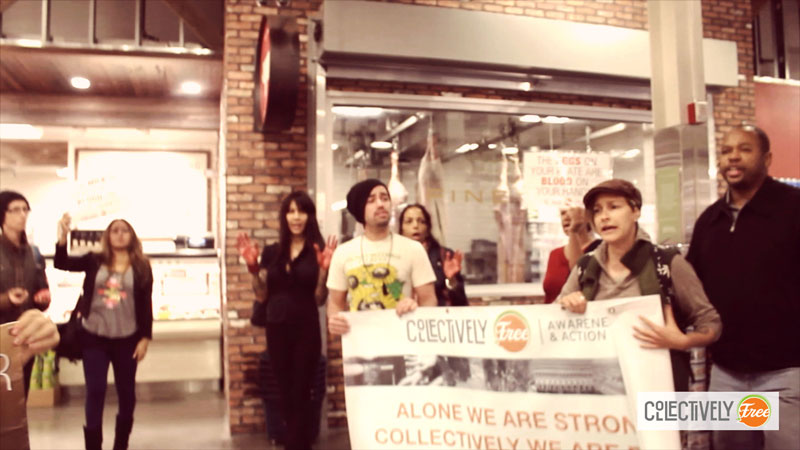