The People’s Climate March. It truly was quite of a march, yet we can’t help but wonder: what exactly were the nearly 400,000 people marching for? Had they been informed of the real issues of climate change? What is causing it? Or better yet, who is causing it?

From banners that read “Climate Crisis Ahead”, “Fracking = Climate Change”, to t-shirts with big red lettering calling for “Climate Justice, Now!”, one would think that everyone carrying around such messages would be aware of the number one cause of climate change. Only a very small (but very strong) percentage of the people in that march were brave enough to scream at the top their lungs the truth that no one cares to hear: animal agriculture is the number 1 cause of climate change. The vegan contingent stood strong and delivered, but were we noticed?

Is it a coincidence that in the pre-march events there was no mention whatsoever of the real issue, that the organizers deleted CF’s screening of Cowspiracy from their website’s events page, and that there were no photos of the vegan contingent in any of the People’s Climate March official gallery photos?

“I’ve never been to a protest march that advertised in the New York City subway. That spent $220,000 on posters inviting Wall Street bankers to join a march to save the planet, according to one source,” wrote blogger and Occupy activist, Arun Gupta. Avaaz, an international activist organization, held a US$10,000 global design contest for the march’s ad campaign covering 10 percent of NYC subway trains. According to the Climate Group’s official websites, their partners include a wide range of corporations such as Bloomberg, Philips Lighting, Dell and Hanergy. – Source here.

The organizations that helped fund this event are the same ones polluting and destroying our planet. To outline the oxymorons even thicker, spokesman Bill McKibben, a pseudo-environmentalist and founder of 350.org, said, “There’s no company on earth who’s done more to try and change the planet than Ben & Jerry’s”?

We agree, B&J’s has changed the world – for the worse. From an environmental perspective, B&J’s is killing the planet by farming cows for milk. All the feed going to the cows could be redirected to malnourished children; the waste produced “livestock” is the #1 polluter of our water, land and air; and that same “livestock” industry is responsible for 51% of the world’s greenhouse gas emissions. From an ethical standpoint, B&J’s lacks morals because their product is the direct result of the rape of thousands of cows and the murder of their babies for “veal”, the sister industry of the dairy industry. The company also fails its customers in its lack of concern for health. Cow’s milk is proven to be harmful to us, contributing directly to conditions like osteoporosis (ever wonder why the biggest number of hip fractures happen in countries with high consumption of dairy?), as well as blocking nutrients from other foods. B&J’s profit-over-people principle went as far as spending $467,100 to help defeat Proposition 37, the California Right to Know GMO labeling campaign.

Ultimately, the march left a lot to be desired. If all the money spent on its campaign and frivolous movie “Disruption” (watch us crash one of its screenings here) had been used to create events that actually spoke about climate change, we would be on a new course in our history.

Rather than patting ourselves on our backs for marching, we should ask ourselves what more can we do next. What did we learn from the experience? What new steps are we going to take to balance our values with our behavior? And we must take these steps selflessly. We must have the humility to take responsibility for our actions. We must come to terms that we have been in the wrong and embrace our chance to do some right. We can fix our mistakes but have to choose to do so. We can start today, by rejecting our participation in the exploiation of humans and non-humans, otherwise known as veganism. Veganism is an alignment of all our inherent values. And it feels good.

Check out CF’s little summary of this march!

Make sure to check out our photo gallery on Facebook! 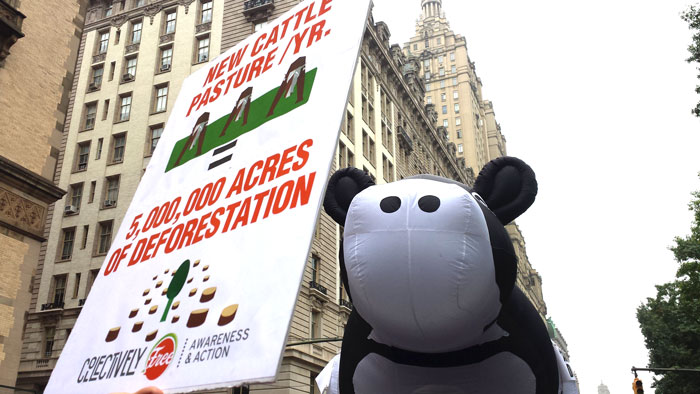