The Police Are No Friends of the Animal Liberation Movement

By Ana Hurwitz
We’ve been lied to about the police. Police in the United States originated from African ‘slave’ catching patrols. And the contemporary function of the police is much the same. We can trace this historically.

Early manifestations of the police force were influenced by the priorities of American capitalist expansion in the early 18th century. Namely the control of the colonized populations and the profitability of slavery. African people were considered private property and their class interests of breaking free were at odds with the interests of the US ruling class, then and today.

But is it fair to judge the contemporary police force by its origins? Yes because the enslavement of Africans never ended. It metamorphosed.

Out of the trans-Atlantic slave trade grew the economic system of Western capitalism which we see today. Today – in prison, on parole, on probation – there are more Africans living under US state correctional control than were enslaved in 1850. Over seven million.

African nations remain shackled in the chains of $200bn foreign debt to the Western-dominated institutions of the International Monetary Fund (IMF) and the World Bank. Africans in the US are murdered by police and extrajudicial vigilantes every 28 hours.

The US “War On Drugs” targets the Black community for nonviolent offenses and has increased the prison population sevenfold since 1980. All this is not accidental, it is a result of material conditions: Communities of color are more heavily policed than white communities. This is a big reason for the ascension of the Black Lives Matter movement in 2013. 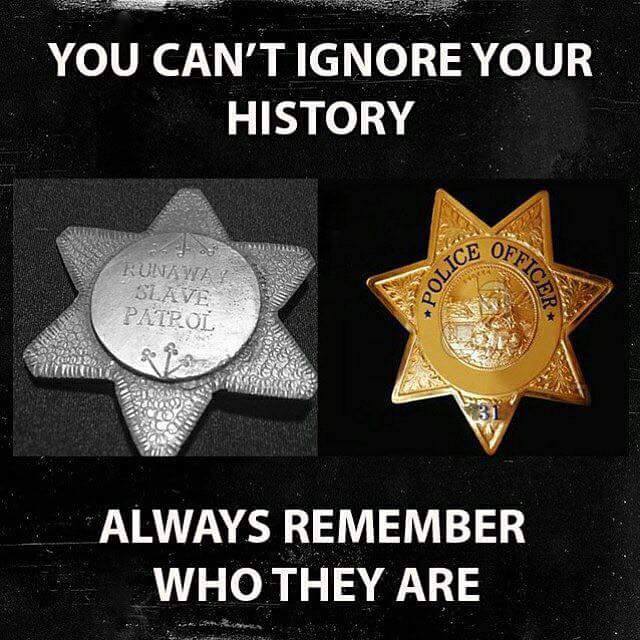 The majority, approximately four fifths, of the world’s peoples living under capitalism subsist on less than $2 a day, mostly in the Third World. Latin America lies in poverty as it continues to emerges from the shadows of 500 years of theft and pillaging by the US.

“Ghettoized” African communities are the face of national hunger in the US. In a world of plenty food, Africa is the face of a global hunger which claims a life every three seconds.

US military bases (linked to Africom) can be found all across Africa, to safeguard natural resources and monitor social unrest which conflicts with American business interests. For this same reason, US military presence has been increasing in Latin America since the early 2000s.

Meanwhile to this day the West owes Africans at least $14 trillion as reparations for slavery. African children in America grow up right from the start within the social decay of underfunded communities, in a system that doesn’t give a fuck about their lives.

And the police protect every aspect of this status quo!

“Are you demonizing the police?” Not exactly. Power concedes nothing without struggle. So we just want to be clear about who our class enemies are. And what we’re up against, if our movement is ever going to win.

The question of police brutality is not a question of “a few bad apples.” We have an entire police force whose members forgo individuality when they’re sworn to serve and protect the “law & order” of this violent capitalist system. And the police use force in order to protect this system.

Yet white vegans do not yet understand the economic and social interests of capitalism, which the police take up arms in order to defend. It reminds of a slaughterhouse vigil I witnessed where a line of police formed a human chain around the slaughter trucks full of pigs to “protect” them from the nonviolent demonstrators. An organizer of the event, who is white, opined that if the police knew what they were doing, they would simply switch sides.

Would the police switch sides? No. And I think you know that’s true. The police have one mission: to protect property and business. The police do not have the mission of protecting the sanctity of life. This is a lie which the state promotes to legitimize the authority of the police. And most white vegans believe the propaganda about the police.

Why do I note the organizer’s whiteness? Because a vast majority of the masses of Black and Brown peoples know very well that the police protect an economic order which is responsible for their historical and current oppression. White people on the other hand have the luxury of being oblivious to this reality.

Whenever Black and Brown folks have attempted to organize against the system, this resistance has been met with brutal police repression. From Ferguson, to Baltimore, to Minneapolis. White people simple do not have this same history. Look no further than the 1985 police bombing of MOVE, an animal rights, environmentalist, and pan-African organization.

Because of these differing racial histories, in our movement it is white vegans who most often sympathize with and attempt to humanize police as if they are ordinary people like you and I. The police are not ordinary people.

​Anyone who believes this assertion to merely be the opinions of this author are welcomed to test this theory. Can we name any movements for change which have not faced police repression? By all means, try to fight back against animal enterprise and see if the police do not stop you. (Actually please don’t try this at home; the police are not afraid to assault you.)

As animal liberationists we have a moral obligation to be in solidarity with the oppressed peoples of the world. Because Veganism is a worldview that sides with the powerless. Because the masses of the peoples in all countries are oppressed by the same capitalist system which is responsible for stealing the lives of billions of our animal friends.

We must be aware that the system is smart and will attempt to confuse us from the reality of class conflict. The system will assimilate diversity into the police and the ruling class, selective individuals within the oppressed classes. This is in order to create popular illusion that the masses of people are not dying and struggling to survive.