It is not a coincidence that Donald Trump rose to power at a time when open challenges to capitalism, colonialism, and white supremacy have become commonplace. In 2011, during my first year of undergraduate studies, I watched in admiration as Occupy Wall Street and the Arab Spring uprisings captivated the world. More recently, the Movement for Black Lives and the No Dakota Access Pipeline campaign have mobilized countless young people; the latter, although facing new threats under the incoming Trump administration, has been powerful enough to temporarily halt construction on the project. Furthermore, climate change is an enormous (and, possibly, final) blow to belief in human supremacy and the inherent goodness of neoliberal economics. With regard to both its causes and effects, climate change is a problem inseparable from racism, colonialism, and the designation of nonhuman animals as worthless unless they can be commodified. European colonial expansion opened up stolen indigenous territory for resource extraction (especially of fossil fuels) and grazing land for “livestock,” and the U.N. Food and Agriculture Organization estimates that more anthropogenic greenhouse gases are produced by nonhuman animal agriculture than all forms of transportation combined. People living in sub-saharan Africa, the Indian subcontinent, and the Middle East are already being devastated by floods, droughts, and heatwaves caused by climate change: acknowledging this, Black Lives Matter’s platform emphasizes that climate justice is an integral part of the fight against white supremacy. It is also estimated that one in six of the planet’s nonhuman animal and plant species could be lost by the end of this century. 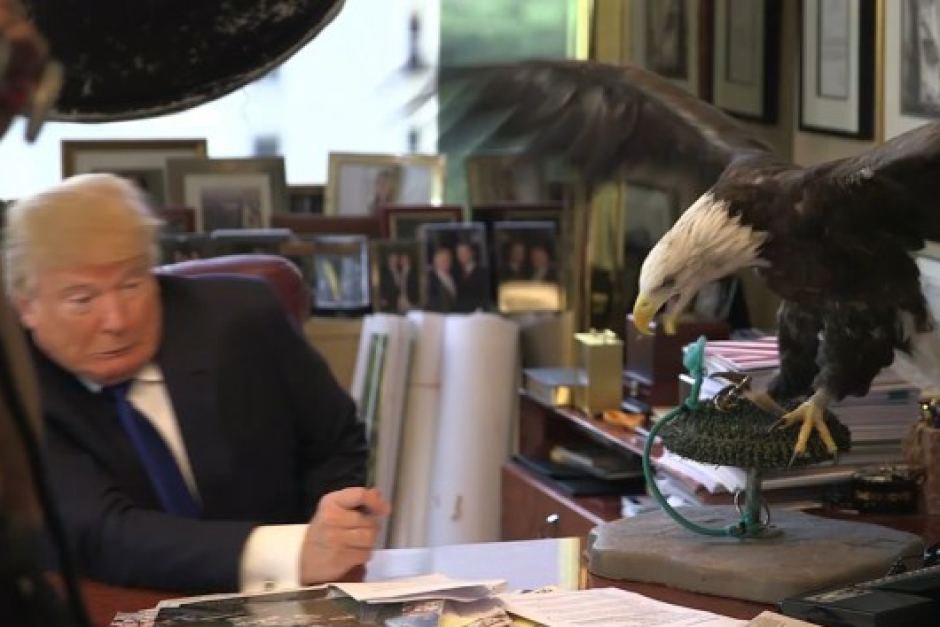 Like previous generations who lived through the Cold War, young people are becoming anxious about the possibility of everything being annihilated. Permanent solutions require us to confront and fully eliminate the parallel narcissisms of white supremacy, patriarchy, and anthropocentrism, which baselessly privilege certain groups over others who are considered to be weaker or “less than.” In response to 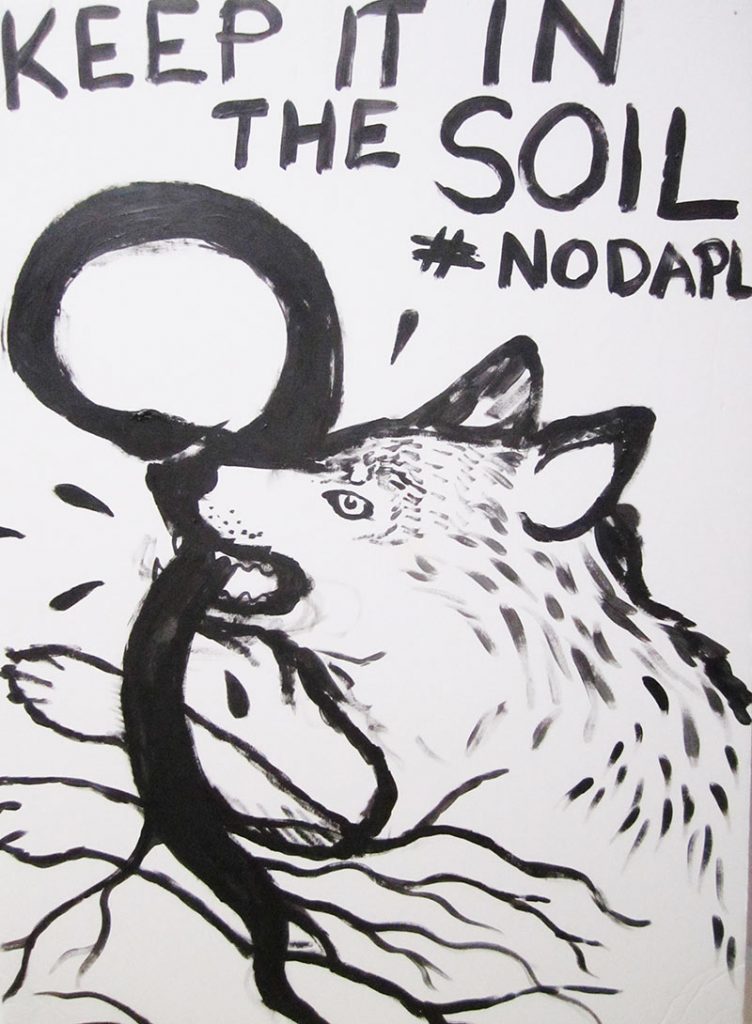 the disintegration of capitalism, the ruling class has offered a different, more easily digestible, set of solutions that will only further entrench its control: we can end the crisis if we deport immigrants, register Muslims, and build a super-fortified wall across the U.S.-Mexico border, promises a billionaire claiming to “Make America Great Again.” At a time when CO2 levels in the Earth’s atmosphere have recently permanently passed the critical “tipping point” of 400 parts per million, Trump insists that climate change is a conspiracy fabricated by China, and he promises increased coal production and more oil pipelines. His choice for leader of the EPA is Scott Pruitt, whose only involvement with the EPA appears to be attempting to dismantle it. Unsurprisingly, Trump and his cabinet are determined to worsen the horrors of intensive farming and the prison-industrial complex (which often overlap): factory farmers and police unions celebrated his election, whereas those of us committed to social justice are left struggling with trauma and depression. As Kathleen Parker of the Washington Post explains, there is a revolving door between nonhuman animal exploiters and Trump’s agriculture advisory committee, which includes Terry Branstad, the first governor to officially approve an “ag-gag” law, and Bruce Rastetter, whose brother’s company manufactures gestation crates for pigs. While simultaneously increasing the trauma, humiliation, and brutality already faced by immigrants, Trump’s proposed wall would interfere with the freedom of wildlife to follow natural migration routes in peace. No one is “invasive” or “illegal,” no one deserves solitary confinement, and no one deserves to suffer the pain of having their family torn apart by an artificial boundary, whether they are humans, turkeys, pigs, elephants, ocelots, bighorn sheep, or roadrunners.

As nonhuman animal activists, we need to understand that Trump’s promise of a “great” America is a racist and colonial fantasy with no relation to reality, much as the persona of Trump himself is a media creation (I have often wondered if he actually exists outside of TV, computer, and smartphone screens). America was never great, and its supposed “greatness” (read: whiteness) was achieved through genocide against indigenous communities, the enslavement and murder of Black people, eugenics campaigns, and the extermination of nonhuman animals. “Drain the Swamp,” reads one of Trump’s slogans (originally used, ironically, by socialists); it’s not coincidental that he relies upon the imagery of subduing nonhuman nature, which is framed as feminine, non-rational, and weak. Making America “great” requires injuring and killing peaceful Black and indigenous protesters, incarcerating immigrants, keeping nonhuman animals firmly locked in feedlots and farrowing crates, and subduing wild places by uprooting them for coal and oil. 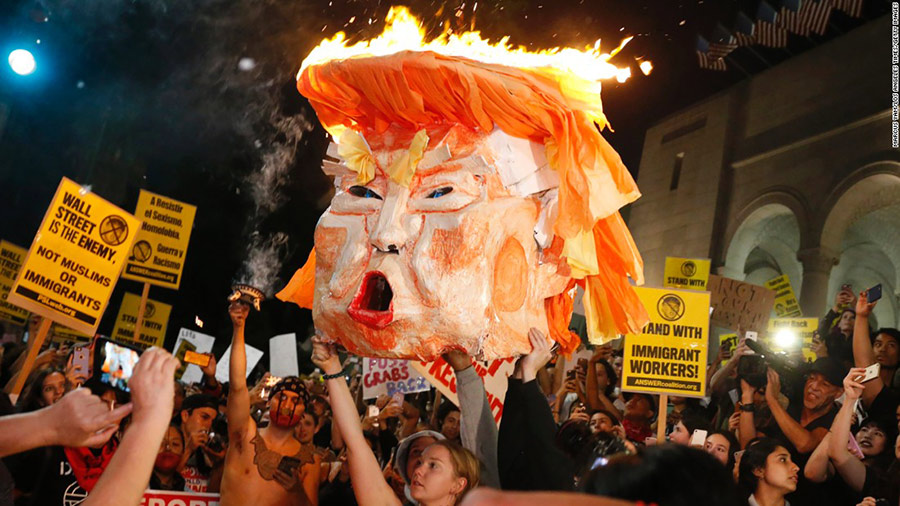 Trump has made his hatred for any kind of vulnerability loud and clear. Like comparable fascist leaders, he perceives acknowledging vulnerability as a threat to the “greatness” of the nation-state. Persons and phenomena that trouble the myth of the ideal (white) “human” body, including women, disabled individuals, indigenous people, immigrants, racial and ethnic minorities, and nonhuman nature, are in danger. Trump’s promises to eliminate the Affordable Care Act and strip Medicaid of funding, as author and activist Carolyn Zaikowski eloquently writes, will be a death sentence for disabled and chronically ill people who will no longer be able to afford medical treatment. Bodies like mine are the antithesis of the vision of a man who wrote a book called Crippled America; one can only imagine how much less he values the lives of nonhuman animals, who don’t often walk on two legs and don’t “speak” in ways that most humans acknowledge as valid. In Trump’s America, it’s permissible to refer to me as a “sicko,” and women exist in order for him and his fellow fascists to sexually assault them. Under Trump, vegan activists can only expect a worsening of the already dismal situation of nonhuman animals, who are continually trampled on what Max Horkheimer and Theodor Adorno refer to as capitalist patriarchy’s “hunting ground” (a term highly applicable to the worldviews of rapists and racist police officers). Trump and his sons have firmly established their white masculine subjectivity through violence against nonhuman animals, whether carried out on expensive African hunts or in the slaughterhouses that produced their infamous “Trump Steaks.” Trump’s disdain for nonhumans serves a very similar function to his denigration of women, immigrants, racialized people, disabled people, and the poor, which is necessary for the preservation of his fragile whiteness, masculinity, and identity as a member of the human species. Of course, this is a part of rape culture, which normalizes and trivializes sexual violence, reassuring men (white men, especially) that they are entitled to the bodies of those who they assume to be weaker than them (for a more in-depth discussion of this with regard to nonhuman animals, specifically, we highly recommend Carol Adams’ The Sexual Politics of Meat). At Trump’s inauguration, a special contingent of 4-H members will be present, showcasing animal exploitation as a cornerstone of the healthy development of the white, American, masculine, heterosexual, and able-bodied subject. The nonhumans whose bodies these teenagers violate, of course, will not be acknowledged, and they will be slaughtered shortly afterward. When climate change makes it critical to think about our own vulnerability to physical and psychological violence more than ever, Trump grotesquely denies its existence. Even the threat of nuclear war, supposedly contained by the fear of mutually assured destruction, doesn’t seem to deter his grandiosity: despite being large enough to render the Earth’s surface unlivable if detonated at once, America’s nuclear arsenal is too small, according to Trump. 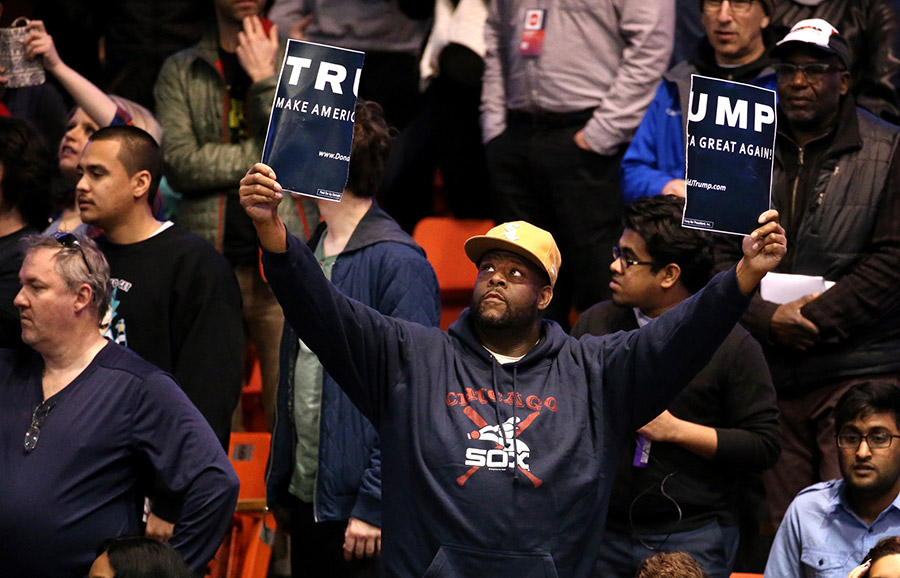 Capitalism, white supremacy, patriarchy, and anthropocentrism are killing us, and, in the age of Trump, we must confront the possibility that these systems of violence will kill us all. Noam Chomsky has openly referred to the Republican Party under Trump as “the most dangerous organization in world history.” If we are to succeed in preserving a livable climate, emptying prisons and cages, and tearing down walls, waging a single-issue fight is no longer an option. The institutions that many Americans have traditionally relied upon (or imagined that they relied upon) for the preservation of peace and democracy have failed to protect them. In the case of nonhumans and marginalized humans, such institutions have never protected us because they were built to silence, destroy, and profit off of us. Appeasement and compliance are not options. Pressing for gradual change is no longer an option. At Collectively Free, we recognize that resisting hatred is a moral obligation. This is why our contingent will be joining Disrupt J20 in Washington, D.C., this Friday, with the generous support of the organizers and Global Justice for Animals and the Environment. If you can’t make it to Washington, we encourage you to join one of many marches and demonstrations taking place in all 50 states and 32 countries around the world. If you find it physically difficult to join street protests, there are many opportunities to provide support through your letters, poetry, visual art, social media posts, and financial contributions. This outpouring of protest needs people who care about nonhumans to help build bridges that risk being torn down by a largely single-issue, capitalist, and overwhelmingly white nonhuman animal rights movement. For all species, the rights to clean water, a breathable atmosphere, and freedom of movement are non-negotiable, and we refuse to tolerate those who would arrogantly sacrifice them in the name of making America “great” again.