Why I Disrupted St. Patrick’s Cathedral on Easter Sunday

By Jacob Martin, with editing by Rocky Schwartz

About 2000 years ago, it is said that Jesus Christ of Nazareth overthrew tables in a temple in protest of hypocrisy, materialism, and greed. Throughout his career, he asked his disciples to follow his path, in pursuit of a world where “the lion lies down with the lamb”, and senseless killing becomes a thing of the past. Raised a Christian, I strongly believe that this is a wise way to live. This is why on Easter Sunday six other activists and I disrupted the St. Patrick’s Cathedral noon Mass. 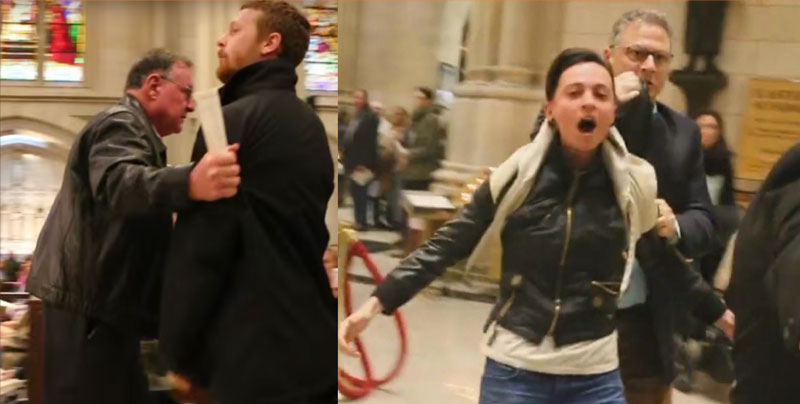 Just as Jesus felt disruption was necessary for creating change, social movements have long employed disruption as a tactic. Whether it was the Stonewall Riots, the Woolworth Sit-Ins, Emmeline Pankhurst storming the British parliament, or William Lloyd Garrison burning the Constitution, history has proven that in order for harmful traditions to be put into question, people have to shake things up.

Like all social justice movements before they begin to succeed, animal liberation is presently marginalized. The plight of nonhuman animals is commonly ridiculed or considered a secondary concern, something we can get around to at some future point, but only after fixing all other problems. When the interests of nonhuman animals are brought up, it is typically in these dismissive terms that they are discussed. But some of us see things differently.

When I was 16, I questioned why we protect some animals, like dogs and cats, and inflict immense harm on others. I started learning about the violence animals endure in the dairy, egg, and honey industries and really began to think about veganism for the first time. A short time later, a local woman, Maria-Adriana Rojas, offered me the opportunity to protest with her and her friends, I became a dedicated activist overnight.

Within three months, my friend William Nievaart and I had started our own Raleigh chapter with Collectively Free, an intersectional animal liberation community that emphasizes a diverse approach and a focus on connecting issues of human and nonhuman justice. Activists in Collectively Free see animal liberation as being a tremendously important issue, one that is not only deeply tied to human rights and environmental destruction, but that is also a genuinely necessary end in itself. Nonhuman animals are guilty of no crime but being born the wrong species, and for this they are punished with confinement, torture, slavery, and death.

The excuses we use to rationalize our actions toward animals have direct parallels to the justifications for sexism (they were made for us), ableism (they are not as intelligent as us), linguicism (they cannot communicate with us), and racism (they look different from us). As animal liberationists we view speciesism as being an equally arbitrary form of prejudice as those that we use to oppress our fellow human beings.

In turn, we strongly believe that the time to demand animal liberation, to cry out in every possible way we can to amplify the silenced voices of the oppressed, is yesterday. From restaurant openings to hot dog eating contests to political gatherings, we disrupt places that normalize violence toward nonhuman animals. We use non-violent speakouts, art, and theater to bring the voices of the animals into spaces where they otherwise would not be heard. On Easter Sunday, we brought these silenced voices to the Church.

During a moment of silence, I rose from my pew with a megaphone and addressed the room of 2,000 people. I told them that “when we use and kill trillions of innocent animals for food, fashion, testing, and other purposes, we have morally failed as a culture.” Addressing the common Christian claim that animals are our God-given property to use as we wish, I said that “if someone is creating animals capable of love and joy just so humans can make them suffer and die, then it cannot be God, for it could only be the devil.” Six activists then joined me, chanting “Easter is a time for love; no more shedding animal blood,” as we were grabbed by security and dragged out of the room.

One commenter compared our action in the cathedral to “yelling ‘fire’ in a theater,” implying that we raised alarm about a non-existent emergency. But in this case, there is an issue at stake that is every bit as urgent as an actual fire. 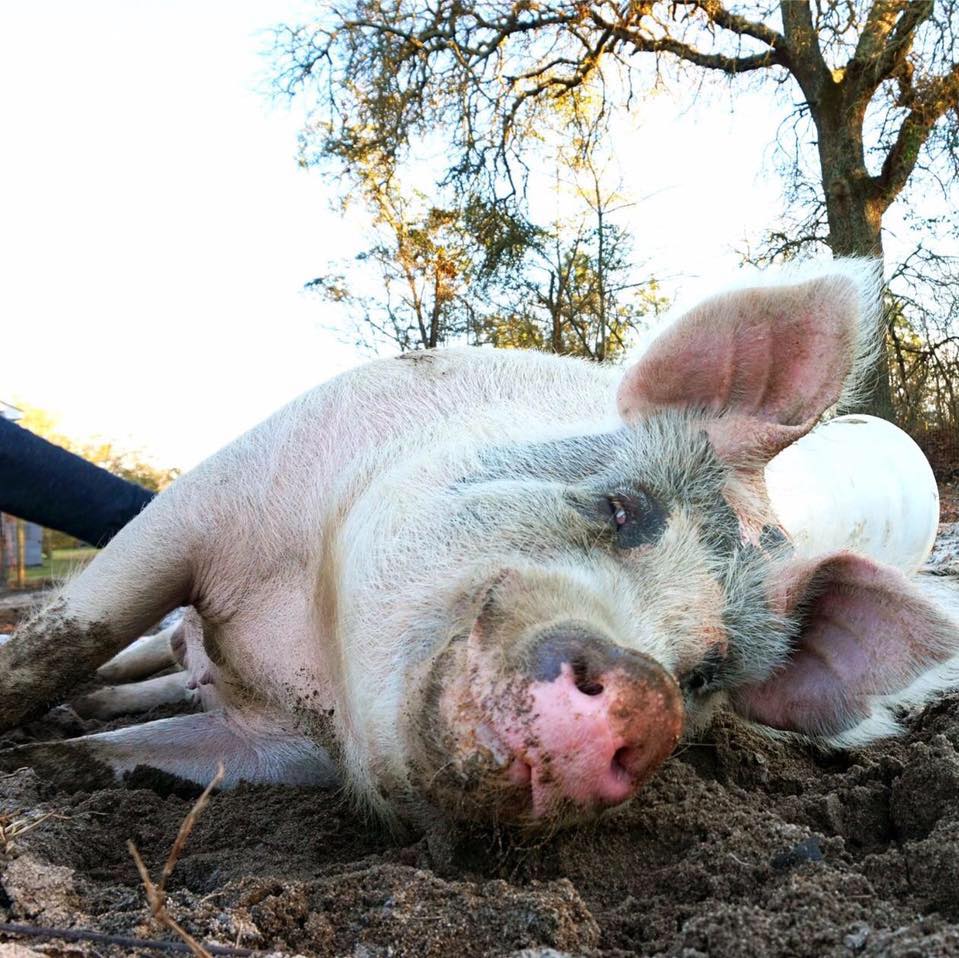 To understand this in a very literal way, consider Odie, a pig who I met at an animal sanctuary in South Carolina. Odie was rescued from a farm fire where his mother–along with hundreds of other pigs–was burned to death. Odie was an infant at the time and small enough to escape through the farrowing crate where he was being kept, so that he could hide. Because of this, he was lucky enough to be only one of two pigs to make it out of the fire. Despite this trauma, and the accompanying burns and scars all over his body, Odie has been nursed back to health, now a full-grown adult who loves human company and back rubs, just as a dog or cat might.

Odie’s experience was tragic, but it is not uncommon. Each year, hundreds of thousands of animals are burned to death in farm fires. And, of course, even if these occurrences were prevented altogether, all the animals would still be violently massacred at a fraction of their lifespans for the sake of profit. In fact, when accounting for all the animals killed in the world for direct food purposes alone, we are looking at 150 billion innocent lives lost each year. This is not a side issue; this is a never-ending genocide that we are responsible for.

So when Catholic and other religious leaders stay silent on this issue (as they have with human rights issues, perhaps most notoriously in the case of systemic child sexual abuse), or even outright condone and participate in it, it is necessary to call their actions into question.

Each Easter Sunday, while celebrating the resurrection of Jesus Christ and his message of love and compassion, people join with their families to feast on “Easter ham” (or lamb, turkey, etc.), a pleasant-sounding euphemism for what is really the flesh of innocent victims who could just as easily have been Odie.

We know that we need to get to the heart of this issue, to tackle the problem systemically, and demand better from those who have the power to make a difference. To do this, we need to make it clear there is an issue. We need to shout “fire” until people understand fires are something to pay attention to.

That is why we disrupted St. Patrick’s Cathedral: To get this issue on the table for the masses and demand a higher standard of justice from religious authorities who have the power to make a difference, because animals lives are their right. We have just begun to fight.

*Collectively Free and Cotton Branch are not associated